College of The Week

· One of Loren Pope’s Colleges That Change Lives

· Clark is a member of the Higher Education Consortium of Central Massachusetts, which enables students to cross-register to attend courses at other area institutions including Worcester Polytechnic Institute and College of the Holy Cross

· Clark is well-known for its programs in the fields of psychology, geography, physics, biology, and entrepreneurship

· Clark’s Atwood Hall, attached to the Jefferson Academic Center, is the primary theater on campus and seats 658. Atwood Hall originally served as the chapel for the university, and historically has been the scene for several notable concerts and speeches, including but not limited to the Grateful Dead, Jimi Hendrix, Bruce Springsteen, Malcolm X, Noam Chomsky and Bill Clinton.

· Clark has more than 130 student clubs and organizations

· In 1985, Clark engaged in a partnership with community groups and business organizations to revitalize Clark neighborhoods. Its efforts in the University Park Partnership program include refurbishing dilapidated or abandoned homes, reselling them to area residents, and subsidizing mortgages for new home buyers. Today, Clark continues to work closely with its neighborhoods.

· In 1997, Clark opened a secondary public school, the University Park Campus School (UPCS), that is also a professional development school for Clark's teacher education program. Students are able to attend Clark University free of charge upon graduation, provided they meet certain residency and admissions requirements. In a 2005 issue of Newsweek, UPCS was named the 68th best high school in the nation.

· Clark’s Athletic Teams, known as The Cougars, are members of the NCAA Division III league and offer 17 varsity sports. The university also offers a wide range of intramural and club sports.

· Purchase offers majors from three schools: the School for Liberal Arts and Sciences, the School of the Arts, and the School of Liberal Studies & Continuing Education

· SUNY Purchase has a 14:1 student-teacher ratio

· Approximately 40% of Purchase's student body is enrolled in the School of the Arts.

· Purchase’s Jandon Business of the Arts Distinguished Lecture Series, endowed by the Donald Cecil family, is designed to enhance the arts management program at the college. Past lecturers include Joseph Volpe, former general manager of the Metropolitan Opera, and Ben Cameron, program director at the Doris Duke Charitable Foundation.

· Purchase’s Conservatory of Dance houses both bachelor's and master's programs, and is one of the most highly regarded conservatories of dance in the United States. It is housed in the Purchase College Dance Building, which was the first facility constructed in the United States solely for the study and performance of dance.

· The Purchase Opera, the school's student opera company, was founded in 1998 and has won nine first-place honors from the National Opera Association.

· Purchase’s Conservatory of Theatre Arts is among the top theatre schools in the nation, according to the Princeton Review, and was ranked 20 in Hollywood Reporter's list of Best Drama Schools in the country.

· As a requirement for the BA and BS degrees, students undertake a senior project in which they devote two semesters to an in-depth, original, and creative study under the close supervision of a faculty mentor.

· Juniata has students from 42 states and territories and 45 countries

· One of Loren Pope’s Colleges That Change Lives

· Juniata College ranks 82 in National Liberal Arts Colleges and 61 in Best Value Schools by U.S.News, and ranked 36th in the 2014 Washington Monthly Best Bang for the Buck

· Juniata College features a "Program of Emphasis" rather than the common Academic Major. Within a certain course framework, students choose and create their own Program of Emphasis and graduate with a degree in it. There are designated Programs of Emphasis that follow a set of courses (e.g. Environmental Science, Communication and Anthropology, etc.) or students may create their own with the approval of two faculty advisors. Nearly forty-five percent of Juniata students design their own program of emphasis.

· Juniata is a NCAA Division III collegiate sports institution. Juniata Athletics, known as The Eagles, is well known for its volleyball program (Men's and Women's)

· Juniata has a longstanding tradition of campus-wide events dating back to its founding days, including but not limited to Lobsterfest, Mountain Day, Storming of the Arch, Mr. Juniata Pageant, Madrigal Dinner, and the Liberal Arts Symposium

· Quinnipiac offers 23 dual-degree programs, including but not limited to an Athletic Training/Doctor of Physical Therapy program, as well as programs in Theater, Social Work, and Cybersecurity

· Quinnipiac offers 20 online programs, including but not limited to Health Science Studies, Business Administration, as well as Certificates in Online Course Design and Occcupational Therapy

· Quinnipiac’s York Hill campus is a "green" campus, making use of renewable energy and environmentally friendly resources, including one of the first major wind farms integrated into a university campus

· The Quinnipiac University in Los Angeles Program is a year-round program that allows students to live, work and learn in the heart of America’s entertainment industry.

· The Quinnipiac University in Washington, D.C. program (QU in DC) gives enthusiastic students from a range of majors the opportunity to live and intern in the nation’s capital

· Quinnipiac's Polling Institute receives national recognition for its independent surveys of residents throughout the United States. It conducts public opinion polls on politics and public policy as a public service as well as for academic research. The poll has been cited by major news outlets throughout North America and Europe, including The Washington Post, USA Today, The New York Times, and CNN.

· Quinnipiac is home to seven fraternities and nine sororities

· Some of the unique degrees and certificates offered at LaGuardia are Energy Technician, Commercial Photography, Industrial Design, Veterinary Technology, Music Recording Technology, Deaf Studies and Paramedic, to name a few

· LaGuardia hosts a number of labs to support student academic and cognitive development, including a Reading Lab and an Academic ESL Lab, both meant to enhance and develop important skills to promote academic improvement and success

· LaGuardia proudly participates in the CUNY NYC Men Teach program, which provides academic and financial supports to Men Teach students, with the goal of supporting them through the certification and hiring process so they can enter the NYC teaching workforce as effective urban educators. Men Teach students may receive monthly metro cards, free certification exam practice tests and other financial incentives, as well as access to a dedicated program counselor who will help with advisement and academic supports.

· The woods of Guilford’s New Garden, which still exist on campus today, were used as a meeting point for the Underground Railroad during the 19th century

· Guilford's program offerings include such majors as Peace and Conflict Studies and Community and Justice Studies, both rooted in the college's history as a Quaker institution

· Students at Guilford as assigned their own personal teams of advisers to assist them with a wide range of important college tasks, including but not limited to academic support and guidance, career education and exploration, and determining interests and opportunities to provide the best experience possible to pursue goals.

· Guilford’s Multicultural Leadership Scholars Program (MLSP) is a year-long program designed to develop students’ understanding of diversity, equity, and inclusion and their impact in society as well as at Guilford. MLSP students receive a scholarship for the academic year.

· Guilford’s Center for Principled Problem Solving and Excellence in Teaching (CPPSET) supports initiatives that apply the knowledge and skills gained through hands-on education and innovative research to solving real-world education problems. Past projects have included creating an outreach program to stimulate scientific curiosity in elementary school students through hands-on experiments, developing curriculum on environmental racism for children at an Eco-Camp in North Carolina, and hosting an educational access summit for youth in Rwanda, to name a few.

· Every summer, Guilford hosts the five-week-long Eastern Music Festival (EMF), where both professional and student musicians come together for seminars and public performances. Each year, EMF features more than 70 concerts and music-related events on- and off-campus.

· Adelphi is home to 8 colleges and schools: College of Arts and Sciences, College of Professional and Continuing Studies, Gordon F. Derner School of Psychology, Ruth S. Ammon School of Education, Robert B. Willumstad School of Business, College of Nursing and Public Health, School of Social Work and Honors College

· Adelphi has partnerships with outside providers who offer study abroad opportunities to students in approximately 120 different countries. For semester and academic year direct exchanges with Adelphi partners, students can use 100% of their federal and institutional aid.

· Adelphi's School of Social Work is home to the Adelphi New York Statewide Breast Cancer Hotline and Support Program, which marked its 30th anniversary in 2010

· The Bridges to Adelphi program is a fee-based program that specializes in social, academic and vocational services for students with autism spectrum disorder, learning disabilities or difficulties with executive functioning, time management skills, etc. The program is designed to make transition between high school and college easier. Students in Bridges to Adelphi individually meet with Bridges staff on a regular basis to help with their social and/or academic difficulties. The program also offers plenty of social groups and events

· Adelphi’s Levermore Global Scholars (LGS) challenges students to examine complex issues and tackle global problems and prepares them to become leading professionals in their chosen fields. The program enriches any major with an interdisciplinary global perspective through seminars and a variety of co-curricular activities, including cultural excursions, internships, study abroad, service projects and activities at the United Nations.

· Located in the heart of Manhattan

· Over 75% of John Jay’s student body identify as a minority (39% Hispanic, 28% White, 21% Black, 12% Asian), while over 130 nationalities are represented among those enrolled at the college. John Jay's diversity is highlighted even further by the fact that 47% of the student body are first-generation Americans, about half speak a language other than English at home, and 33% are foreign-born.

· There are 52 student organizations active on campus, many of which are housed in "Club Row", a series of hallways where the student clubs are given space

· John Jay’s campus consists of six buildings, including the New Building, which directly connected to the western side of Haaren Hall and includes classrooms, conference rooms, a black box theater, a mock court, a 9/11 memorial, and an exterior roof quad called the "Jay Walk.” The New Building, constructed in 2011, was listed by real estate publication The Real Deal as one of the “ten best buildings to see in America” and one of “the coolest works of architecture in the country.”

· The CUNY Justice Academy (CJA) is a partnership of seven CUNY community colleges with John Jay College of Criminal Justice to help students make the transition to a baccalaureate degree. By completing an associate degree in a CJA major at one of the participating CUNY community colleges, students in the program are automatically part of the CJA and receive dual admission that puts them on track to complete their bachelor’s degree at John Jay.

· SASP Peer Success Coaches are assigned to all Freshman students in First Year Seminars at John Jay. As one of their first connections at the college, Peer Success Coaches familiarize students with the college, make referrals to campus resources, offer ongoing tips for academic success, and connect them to friends and mentors. They also offer individual and group success coaching sessions.

· Through the SUNY Albany and SUNY-wide exchange programs, students have more than 600 study-abroad programs to choose from

· SUNY Albany offers over 300 student clubs and organizations, as well as 18 NCAA Division I Athletic Teams

· SUNY Albany’s Academic Support Center offers tutoring, peer advising, as well as “walk-in” advising sessions. The University requires that every student meet with their advisor every semester through graduation to assist students in taking advantage of all that UAlbany has to offer.

· SUNY Albany offers MAPs (Major Academic Pathways) to its students. MAPs are detailed plans that help students stay on task in their chosen major over the course of the four years of college. They outline each semester, as well as summers, and provide needed classes and suggestions about internships and job searches. 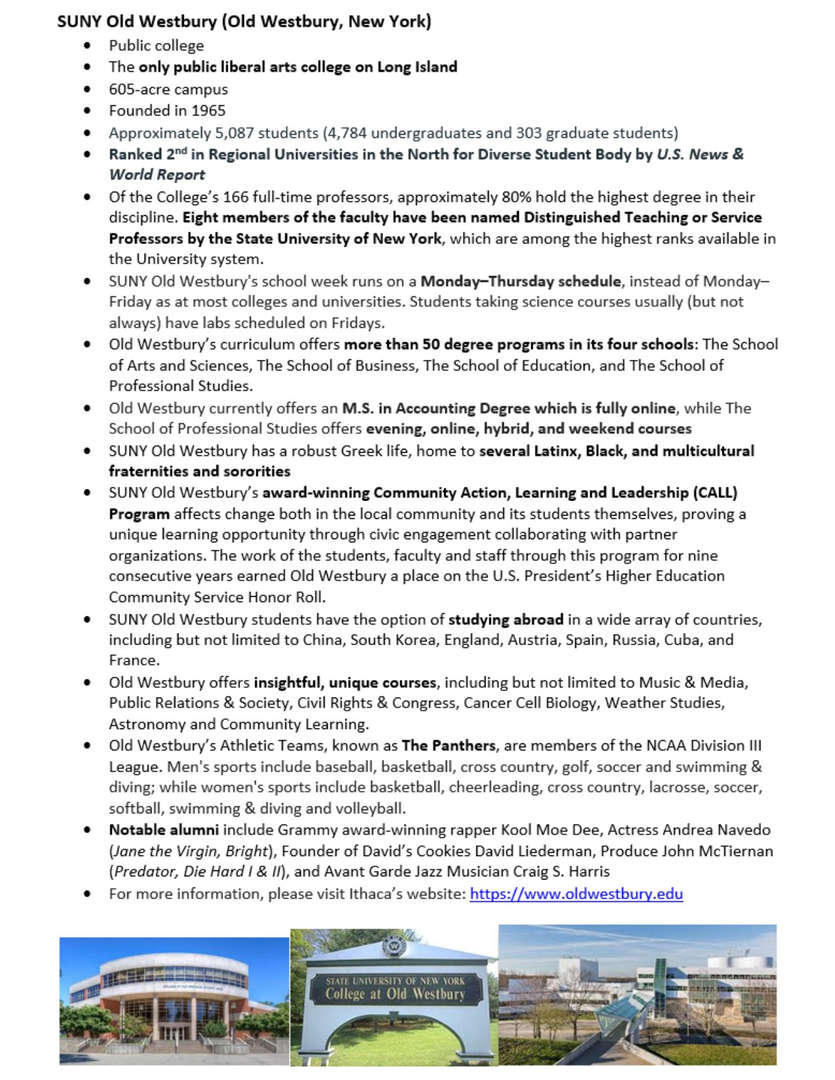 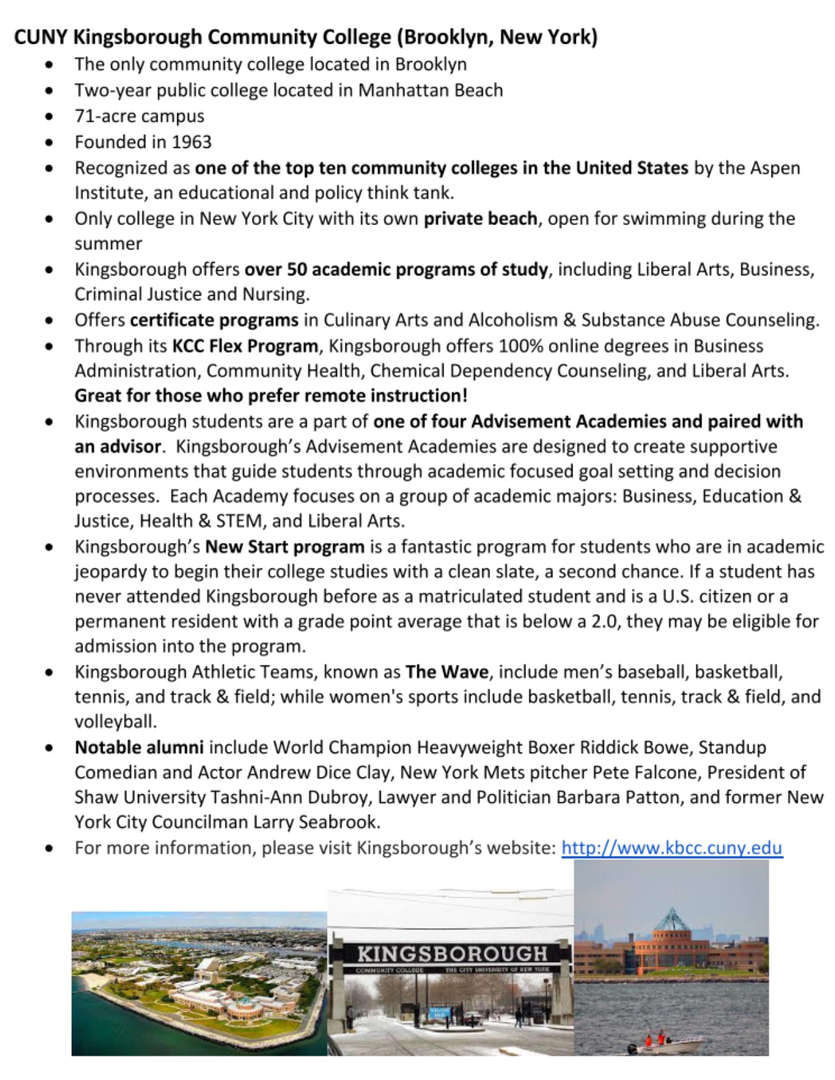